Season 1 of the McElroy’s Dungeons & Dragons podcast The Adventure Zone contains a strange, delightful, and potentially game-breaking homebrew item called ‘The Ring of the Grammarian’. Here are the rules:

The Ring of the Grammarian can be used, once per day, to alter one letter in a spell title, as you’re casting it, for a different effect. For instance, the wearer can start casting Cause Fear and activate the ring to instead cast Cause Bear. [src.]

There are two readings of these rules. The first, narrow reading is that ‘The Ring of the Grammarian’ lets the caster substitute a single letter of the spell’s name. ‘Fear’ becomes ‘Bear’; ‘Heal’ becomes ‘Meal’. This is likely to result in a lot of interesting play, but it’s extremely limited. Then there’s the second, more generous reading: the ring lets the player substitute or add or remove a single character from the spell’s name.

The Ring is a fun homebrew item, and none of my players are power gamers by any stretch of the imagination, so I’ve opted (in my own games) for the wider interpretation. Judging by their current behaviour, my players are pretty likely to burn every daily use of this item casting ‘ginvisibility’ to discover the location of the nearest tavern or switch ‘Message’ for ‘Massage’ during a short rest. I’m comfortable with a ‘rules as intended’, vague, spirit-of-things ruling here.

After my party’s sorcerer asked me whether he could — y’know, totally hypothetically — cast the evocation cantrip ‘Light’ spell as the 4th level necromancy spell ‘Blight’ once per day, I got to angsting. Exactly how bad could this get?

There are a few specific questions about potential game-breaking-ness, here, and it’s worth taking each question in turn.

First, the easiest question: how many of these ‘Light-to-Blight’ cases are there? How many changes to a spell, legal according to the wider interpretation of ‘The Ring of the Grammarian’ rules above, result in the caster being able to access a more powerful (ie, higher level) spell?

This is a question about the minimum edit distance between spells on the standard list. As it turns out, I do text analysis semi-professionally, so this is exactly my kind of problem. Let’s ask it in a more technical register: how many pairs of spell names have a ‘Levenshtein Distance’ of exactly 1?

This is eminently computable, and so I downloaded a list of 462 spells and computed it. Here are all the pairs:

Despite the fact that there are only four pairs, it turns out that ‘Pairs of Spells With a Levenshtein Distance of 1 on the Standard Spell List’ alone drifts into dangerous territory. First, three of the four spell transformations would still be legal in the narrowest interpretation of the rules. Second, all of these represent some kind of substantial level/power jump. While it’s true that my party’s sorcerer discovered the only big damage change that’s available to him (trading a non-damaging evocation cantrip for a 4th level necromancy spell capable of doing 8d8 damage), there are (arguably more concerning) risks. In the non-destructive arena, he already has the extremely-situational utility cantrip ‘Mending’, which gives him access to the 3rd level ‘Sending’ and, with it, the ability to send a Brain-to-Brain-Direct-Message to pretty much anyone he’s familiar with once per day. While the movement from ‘Shatter’ to ‘Scatter’ represents a decrease in potential damage — trading 3d8 thunder damage for the ability to transport up to five creatures to an unoccupied, visible space within 120 feet that must be on the ground or on a floor — the potential for battlefield control here is massive. Trading ‘Wind Wall’ for ‘Wind Walk’, though, is what concerns me most: clever use of the latter allows the entire party to fast-travel and fly, in gaseous form, massive distances each day. With a maximum duration of 8 hours, it’s reasonable to expect that the party can trade ‘ten days of travel on foot, with all of the attendant risks and resource constraints’ for ‘one day of flying as a wisp of cloud with resistance to damage from non-magical weapons’. Every day. ‘Wind Walk’ is (ordinarily) a Druid-exclusive spell, first available (once per day) at 11th Level; with ‘The Ring of the Grammarian’, it’s now effectively accessible to Druids much earlier (at 5th level), as well as Nature Domain Clerics at 5th level and Rangers at 9th level. I don’t currently have any Druids, Clerics, or Rangers in my party, but at least one player has made noises. I’m one granola romantic partner away from a problem.

Putting a Price on Power

The game I run at the moment is a pretty high magic setting, and I made two choices early on with this in mind:

As sensible as this felt, it also meant that I needed a catalogue of prices for all the magic items they might want to buy. I’m pretty lazy, so I went with Saidoro’s ‘Sane Magic Item Prices’, stripped out all of the flying and gamechanging items, and augmented it with the most complete Adventure Zone ‘Fantasy Costco’ list currently available. For the record: this last bit is where I made my mistake.

The Adventure Zone is iconic, and (second only, perhaps, to Critical Role) responsible for bringing more wonderful new players to the game than anything else. The problem is that, like the much-discussed ‘Matt Mercer Effect’, Griffin McElroy’s worldbuilding has given some players — and certainly me, as a young DM — some distorted expectations. Fantasy Costco prices make sense in an environment where wealth is hard to come by and daily expenses are nonexistent. The items are powerful, but they’re backed-up by a safety net of ‘Doing This Professionally’ narrative podcasting, and access to them is carefully managed by the DM over a period of years. Saidoro’s ‘Sane Magic Item Prices’, by contrast, are ballpark estimates for the economy that’s sketched by the Player’s Handbook and Dungeon Master’s Guide, where a Greatsword costs the same as the day wages of 25 skilled hirelings. I’m running an improv-heavy, small-characters-in-a-big-world campaign, but we have an (admittedly twisted) sense of realism. I ask my players to earn and spend money in the course of their lives. ‘Adventurer’ is a deliberately dangerous — and profitable — line of work.

One of my favourite things about Saidoro’s ‘Sane Magic Item Prices’, as a resource, is that it gives a rough sense of how much casting a spell is worth. Consumable spell scrolls are included in the listing as follows:

Let’s go deep here. This means that casting ‘Light’ once would be worth around 10gp and casting ‘Blight’ once would be worth around 320gp. ‘The Ring of the Grammarian’ is listed as 800gp in The Adventure Zone (S01E50). According to Saidoro pricing, this means that it would ‘pay for itself’ in a mere three Light-to-Blight uses. Mending-to-Sending is the worst ‘spell switch profit’ and casting would take five uses to pay for the Ring, but a single use of Shatter-to-Scatter or Wind-Wall-to-Wind-Walk would put you very much in the black.

In other words: even if the only available spell switch in the ‘Ring of the Grammarian’ was the least profitable one (Mending-to-Sending at ~190gp profit), a more reasonable starting price would be 4750gp. As it stands, with the average ‘spell switch profit’ being 685gp according to the spell scroll prices, a more reasonable price for ‘The Ring of the Grammarian’ is probably 17125gp, not 800gp. That’s around the same cost as paying the wages of 25 skilled hirelings for almost a year. Or buying 85625 gallons of ale.

If you trust these guesstimates, the Ring is priced at an approximately 95% discount.

How Bad Could Bad Really Be?

So far, I’ve only addressed the most easily computed (and articulated) potential risk: situations in which one low-level spell is transformed into another, higher-level spell, effectively removing any ability for the DM to creatively interpret the possible spell effect. ‘Cause Bear’ could do any number of things, not all of them pretty or powerful, and there’s safety in that when you’re sitting behind the DM screen.

It’s still worth wondering, though, how wide the world of all possible new spells could be. How many ‘Cause Bear’ spells are there?

To get a better sense, I downloaded a dictionary of 466551 words. For each word in each spell, I generated a full list of all words in the dictionary with a Levenshtein Distance of 1. This gives us a broad estimate of the possible space of each spell. This is a very generous estimate — the dictionary is huge, and most spell changes are far from meaningful, but it’s a start.

The Cliff’s Notes of this analysis aren’t great, at least from an angsting DM’s perspective. The mean number of ‘Possible Ring Spells’ is 35. The maximum number of ‘Possible Ring Spells’ for a single spell is 168 for ‘Cone of Cold’. Only 23 spells on the list have no possible ‘Ring Spells’ by this measure — it’s not surprising that there’s no word in the dictionary one character-step from ‘Druidcraft’. If you’re looking for comfort, the best I can give is that the shape of possible spell names is not normally distributed, but is instead an exponential decay: 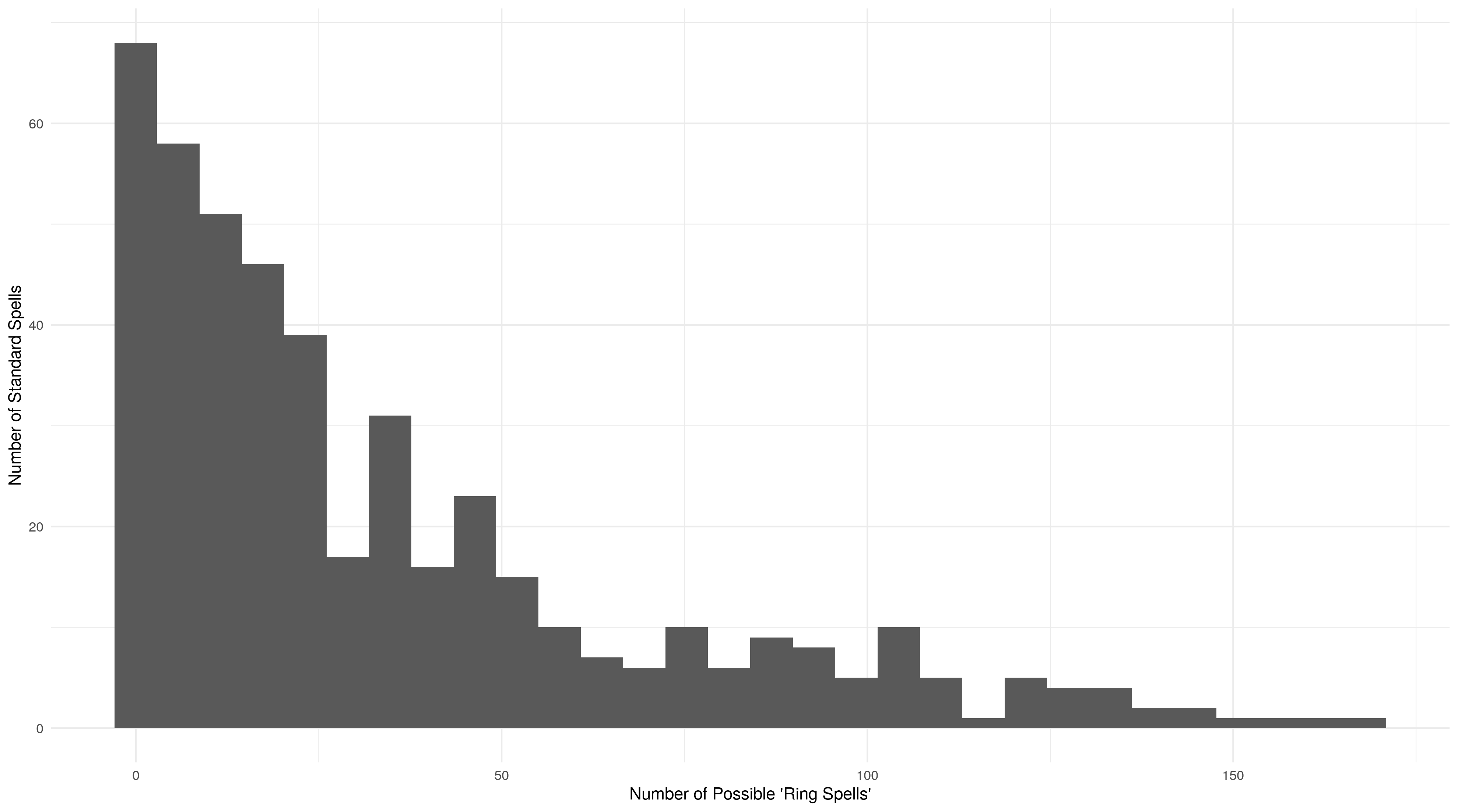 Where this gets more interesting (and concerning) is when thinking about the capability of individual players. Even if (for a moment) we assume that only ten percent of the ‘Ring Spells’ make enough sense for a player to actually use at the table, there’s still a surprising amount of potential, with the mean spell yielding at least three sensible changes.

There’s no strong relationship between a base spell’s Level and its ‘Ring spell potential’: 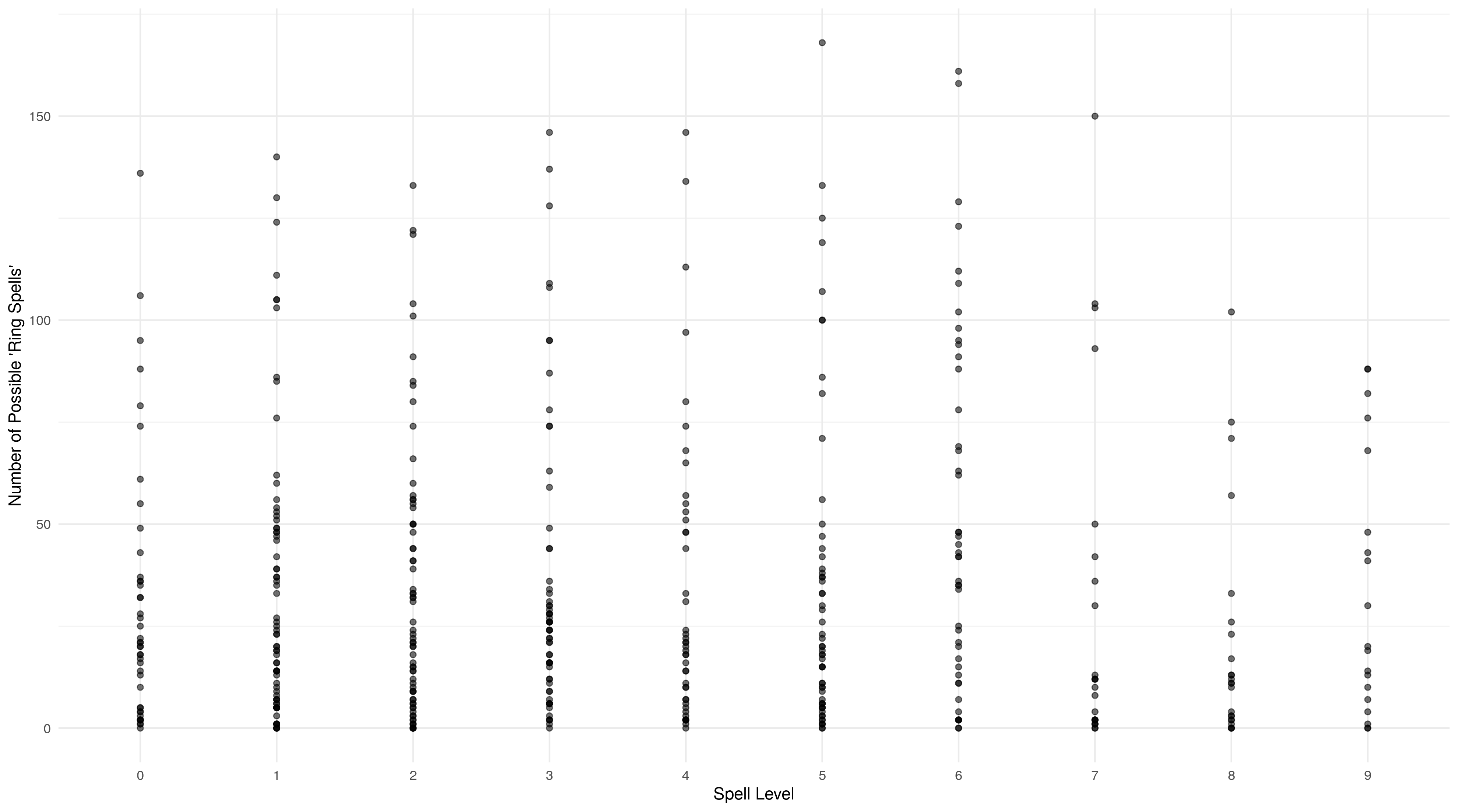 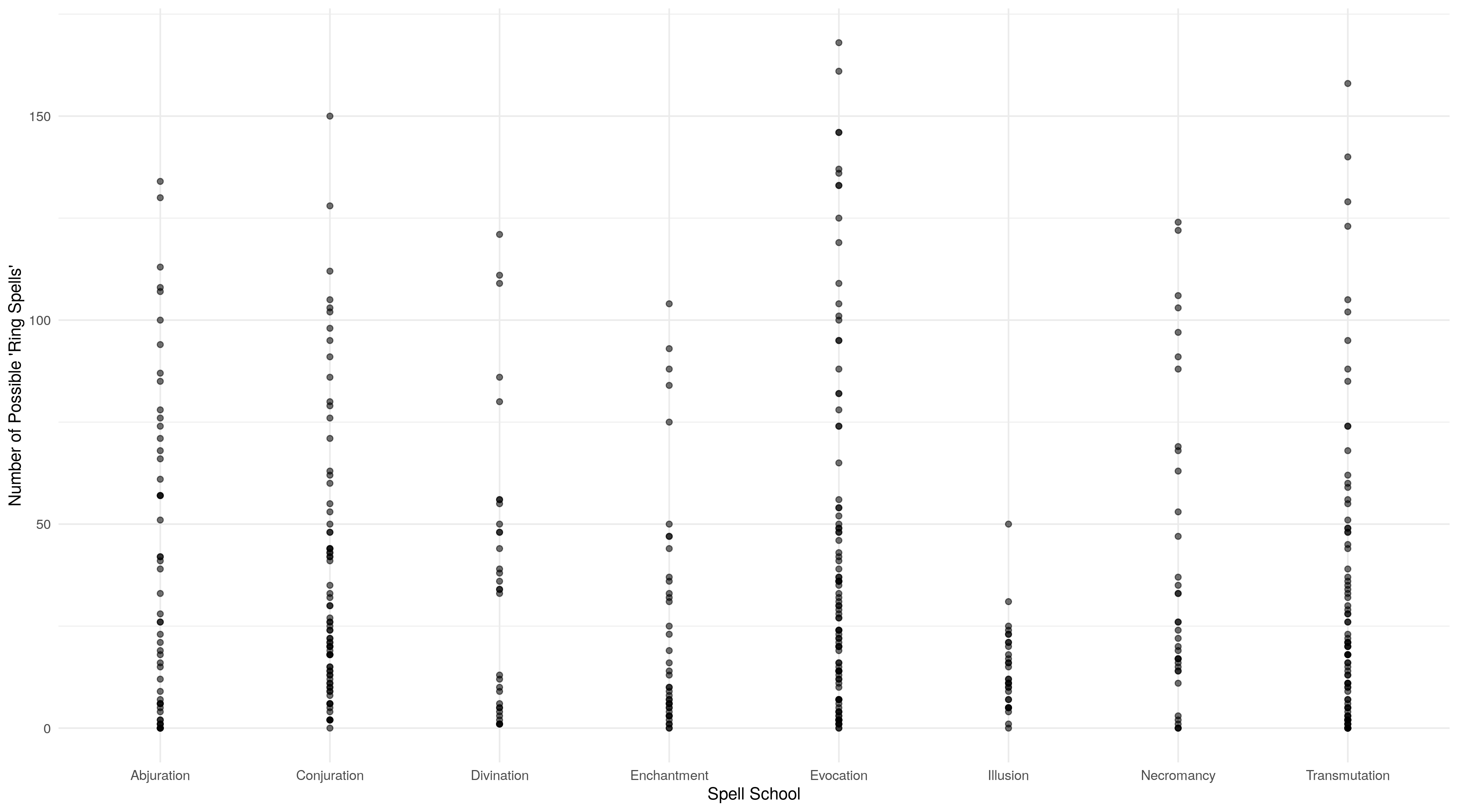 With one exception. It’s worth noting that a player build focused on Illusion is certainly likely to do the worst. True, there are also far fewer spells in the school as a whole when compared to, say, Evocation (31 vs 100). (Remember that these spells are in no way normally distributed: more spells in the list means more of a chance to grab one of those wild, long-tail lucky base spells like ‘Cone of Cold’.) But if we take our ‘one in ten’ best guess at the number of real options available, Illusion is still faring unusually poorly compared to every other school:

In fact, only two Illusion spells have the real potential of three (or more) likely uses on this measure: ‘Nystul’s Magic Aura’ and ‘Fear’. I think we ought to hold these estimates quite lightly — if for no other reason than that I think I could, as a DM, probably make a reasonable ruling on ‘Bear’, ‘Dear’, ‘Ear’, ‘Far’, ‘Feat’, ‘Gear’, ‘Hear’, ‘Year’, ‘Near’, ‘Sear’, and ‘Tear’ — but I still have my reservations.

Don’t add gamebreaking homebrew items from podcasts without thinking through the consequences.